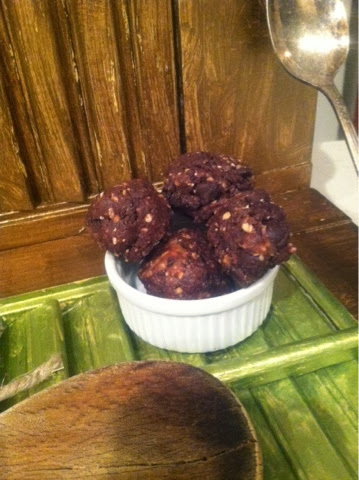 Twin Bing candy bars were my all time favorite before vegan. I don't even know if they are nationwide. They are soft marshmallowy cherry centers covered in a thick chunky peanut chocolate outside layer.

I even found a recipe to make them in bar format. However, the bars called for cherry chocolate chips that tasted a wee bit like cherry cough syrup and made for a waxier cherry section. I had tweaked it over the years adding marshmallow etc to it to get it closer.

Then came vegan. That recipe needed to go by the wayside. Too much dairy and they were full of chemical, super processed ingredients. The recipe just drifted away with so many others too involved to veganize.

Since the first of the year I've been trying to avoid super sugary, super not-so-good-for-anyone stuff. I'm pretty sure I haven't baked any treaty thing since the New Year.  (Uh, pretty sure is as good as it gets, I may have succumbed to something...).

So, Friday, while needing a little sweet fix I stumbled on this treat. Honestly, I'm estimating the measurements because I used my hand and scooped.

Toss the peanuts, raisins, cherries in a food processor and whir them until a sticky, mostly uniform concoction starts. You want it to stick together but not be so sticky it won't come off your fingers. If it's too sticky, add a few TBSP of peanuts, if too crumbly more raisins and cherries. When you are happy with the consistency toss in the chocolate chips and whir away breaking them up a bit.

Then roll the mixture into balls (or press into bars) and refrigerate. Makes about 24 walnut sized balls. Enjoy. These are pretty stinking satisfying. Not Twin Bing clones but the taste and texture is pretty darn close.
Posted by Scrambled Dregs at 7:30 AM No comments: