Scraps and Snippets ~ Kickin Cauliflower and The Art of Hostage Negotiations... 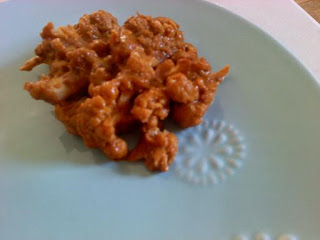 Mix all three liquids together in a small to medium crock pot. Break the cauliflower up into small pieces and toss them into the sauce and stir until all are coated. Cook on low for 3 hours or so. This is SPICY.

I was inspired by Peas and Thank You's cauliflower recipe. But lazy...and wanted to use my crockpot. This is so spicy. If you like hot, give it a shot.

Our fourth night learning all about law enforcement in our fair city was as fascinating as the rest of them have been. The Lt of the hostage negotiating team explained how to talk people down from some pretty horrifying thought processes.

There are apparently two major schools of thought on negotiating. The NY style (as in New York) is the talk until the situation is resolved style. Talk. Talk. Talk. The LA style (bet you can figure that one out) is shock and awe. He mentioned a large SWAT truck with a smiley face on the front driving through walls and taking care of the problem. Our city prefers the NY gentle version of handling conflict. I’m thinking talking to a crazed person might be as scary as a monster truck making a drive thru window out of a wall. The LA style might be cheaper, though,  some talk-a-thons take HOURS. Sometimes there are fails, no matter how they try. They lost a negotiating phone to gunshot wound when the would-be suicide decided to go ahead and follow through. The truck route wouldn’t have likely stopped that outcome, either.

Becoming a police officer. Starts out pretty benign. A physical test that borders on ridiculously simple. Our instructor assured every one in the room, including the sixty-year-olds, would be able to pass it.

The written test with it’s thirteen pages certainly separates the men from the boys and the girls from the women. Pass that and the wannabe gets to run the city’s pet and ramped up version of the physical test.

Pass that and it’s on to the oral interview. Survive? Moving into the psych evaluation and the lie detector test. When that’s all said and done and the wannabe is still one of the few standing, they get a conditional “offer” then a physical.

After 14 weeks at the Iowa law enforcement academy they return to do two more weeks of intensive training to be one of our city’s finest. Finally a cop? Sure, after 17 more weeks of Field Training…and a year of probation. No wonder a hundred applications nets two to three keepers.

I’m thinking if most law enforcement agencies require half of what ours does, our police officers really want to make a difference and are well equipped to make our streets safe.

Posted by Scrambled Dregs at 3:00 AM No comments: