Scribbles and Scrambles ~ Past Blast 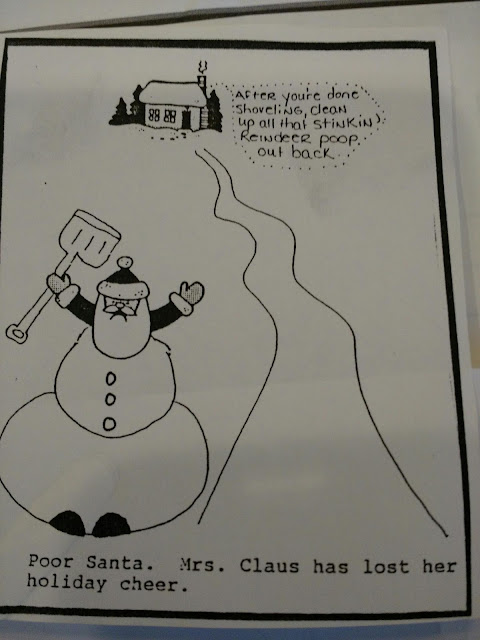 My friend X-ta is one I picked up in a former life. No, not Shirley MacLaine style, as in a long, long time ago when I was much younger, naive and impressionable.

I used to run a non-profit for child care providers. She ran a volunteer program for senior citizens. They should never have put us in the same private office. But they did.

Within the first week of X-ta dropping into my life she had convinced me she was 15 years older than she actually was and introduced me to what a bachelors in theater looks like in the non-profit world. Ha.

We did several collaborative projects. One an afghan representing the landmarks in our town wherein we got to do field trips and take photos of said landmarks. My favorite was the cigarette butt between the fingers angel statue. This photo was, of course, not included on the afghan. Her newsletter also featured my editing, suggestions and occasional art. This 20 something year old cartoon is not my art but I'm pretty sure it consumed much of my day anyways.

X-ta has gone on to produce award winning publications in her current position. And she is a creative force behind Out of the Frying Pan. I believe we brainstormed the idea of two older strong-personality women who solved crime. One of which had to have the name Zula. Stay tuned for more.
Posted by Scrambled Dregs at 5:20 AM 4 comments:

Email ThisBlogThis!Share to TwitterShare to FacebookShare to Pinterest
Labels: a picture is worth a thousand words
Newer Posts Older Posts Home
Subscribe to: Posts (Atom)