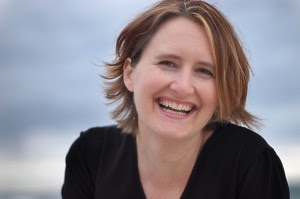 Mary E. DeMuth is an expert in Pioneer Parenting. She enables Christian parents to navigate our changing culture when their families left no good faith examples to follow.

Mary also inspires people to face their trials through her real-to-life novels, Watching The Tree Limbs
(nominated for a Christy Award) and Wishing On Dandelions (NavPress, 2006).

Mary has spoken at Mount Hermon Christian Writers Conference, the ACFW Conference, the Colorado Christian Writers Conference, and at various churches and church planting ministries. She's also taught in Germany, Austria, Monaco, Italy, France, and the United States. Mary and her husband, Patrick, reside in Texas with their three children. They recently returned from breaking new spiritual ground in Southern France, and planting a church. 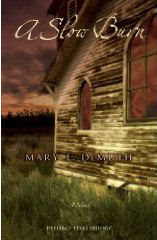 She touched Daisy’s shoulder. So cold. So hard. So unlike Daisy.

Yet so much like herself it made Emory shudder.

Burying her grief, Emory Chance is determined to find her daughter Daisy’s murderer—a man she saw in a flicker of a vision. But when the investigation hits every dead end, her despair escalates. As questions surrounding Daisy’s death continue to mount, Emory’s safety is shattered by the pursuit of a stranger, and she can’t shake the sickening fear that her own choices contributed to Daisy’s disappearance. Will she ever experience the peace her heart longs for?

The second book in the Defiance, Texas Trilogy, this suspenseful novel is about courageous love, the burden of regret, and bonds that never break. It is about the beauty and the pain of telling the truth. Most of all, it is about the power of forgiveness and what remains when shame no longer holds us captive.

If you would like to read the first chapter of A Slow Burn, go HERE

Emory Chance was a tragic character in last year's Daisy Chain. In Slow Burn, the story of Emory's loss and failures, she becomes even more tragic. Though Jed Pepper was a character who made my heart ache, Emory was one who frustrated and challenged me.
Mary DeMuth creates characters who behave in awful and ugly ways yet as she reveals the deepest, ugliest parts and pieces of them, she manages to do so with grace so that I found myself filled with pity for Emory and hoping that she'd escape from her emotional prisons.

The subject matter covered includes abuse, negligence, drug abuse, immorality and sensitive readers should consider that this is not your traditional Christian fiction.

At the end of A Slow Burn there is still the mystery of what happened to Daisy and who did it? I am compelled to finish this trilogy as I feel the need for closure and I want to read Ousie's story. I'm hoping that the Pepper family finds much grace and healing and that Emory finds complete and total peace.

DeMuth writes in a literary voice that sometimes crackles with intensity and sometimes oozes molasses-slow emotion into the storyline. Folks who don't care for introspective and deep fiction and the slowness that results may not find the series to their liking. I think people struggling with issues of faith and failures might find some hope and healing within the story of these very broken people and the God who loves them.
Posted by Scrambled Dregs at 4:37 AM No comments: