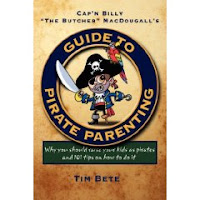 I'm stepping out of the normal sequence of things. Call me Abby - Abby Normal, if you will.

I "met" Tim Bete on a Christian humor writers e-mail loop. He just published Guide to Pirate Parenting. How can I not include him in my Q & A's? The title alone...

I'll have my usual tour Wed and Friday of this week, but I just had to slip this in. Do go to Tim's Pirate Parenting website.

Questions in red, Tim is blue.

Fiction character you would most like to be or most identify with and why?
Cap’n Billy the Butcher MacDougall, from my book, Guide to Pirate Parenting. My relationship to Cap’n Billy is like Dr. Jekyll’s relationship to Mr. Hyde.
Some out there in writing land have strange rituals. Share yours.
I have a day job, so I usually write at night, after my kids are in bed. I grab a beer, sit down at the PC, and bang my head against the keyboard until I’m unconscious. When I come to, I clean the drool off the keyboard and look to see what I’ve written. It’s usually not pretty.

If you could change something in any novel, what would you change about it and why?
I’d rewrite classic literature, changing all the characters to pirates.

You get the idea. Any novel can be improved by adding pirates.

Favorite turn of phrase or word picture, in literature or movie.
From The Importance of Being Ernest:
Algernon. [Picking up empty plate in horror.] Good heavens! Lane! Why are there no cucumber sandwiches? I ordered them specially.

Lane. [Gravely.] There were no cucumbers in the market this morning, sir. I went down twice.

Lane. No, sir. Not even for ready money.

Cucumbers are hysterical. The funniest vegetable by far.

What makes you feel alive?
Food, water, oxygen and an occasional glass of wine.
Favorite book setting and why?
I usually set books on the nightstand, next to my bed. Why? Because I read in bed. I also like books with ocean scenes. I love the water.
Which compliment related to your writing has meant the most and why?
One of the best compliments was this quote:
"I loved Guide to Pirate Parenting! It’s as if Cap’n Billy was ripped from me own loins, which would explain that drafty feelin’ I get in me nethers."
-- Mark "Cap'n Slappy" Summers, co-author of Pirattitude! So You Wanna Be A Pirate? Here's How, and co-founder of Talk Like a Pirate Day

Cap’n Slappy is the king of pirate humor, so I really appreciated his endorsement. Plus, I only had to send him a case of rum to get it.
What criticism has cut the deepest and why?
When I was in kindergarten, I was a model in the local department store’s back-to-school fashion show. I had trouble unbuttoning the raincoat I was modeling. It ended my career as a male model. I was never asked back, and I had to return the raincoat. If only I could have handled those buttons, I’d be famous today.

What would you do today if you knew you had only a week to live?
First, I’d stop answering these questions. Then, I’d go to the beach with my family.

What is your favorite word?
Special
What word annoys you more than any other?
Overdue
Favorite chore
One that’s already done. I hate folding socks.
CREATIVE CORNER:
At a writers’ workshop, the instructor asked attendees to write a short story that included mystery, sex and royalty. One attendee wrote: “I’m pregnant,” said the Queen. “I wonder who-dunnit?”

Now that’s a short story.
Describe something you can see, hear, taste or feel without telling us what the item is.

Okay, so there’s a really sharp pain in my left shoulder, and I can hear laughing and there’s a musty – slightly fishy – smell in the air, and then someone says, “That’s the last time you steal me rum, you scurvy bilge rat!”

Answer: The item was Cap’n Billy the Butcher’s hook. I bet the Emergency Room doctors haven’t had to remove a pirate from a writer before.

Posted by Scrambled Dregs at 7:31 AM 6 comments: