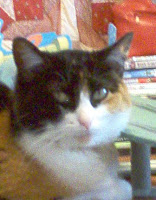 A random thought occurred to me around 7:10 a.m. this morning.

This is a near miracle in itself. Rarely, am I awake enough at 7:10 a.m. to experience anything resembling a clear epiphany.

Would I go so far to call this an epiphany? Ha.

That would be a “no” for the uninitiated to the way my gray matter ebbs and flows.

You sure? Because not only is it rich, it is pre-coffee.

Porcupines must really throw their quills. I believe this because I have been victimized by the art of small hair throwing mammals.

As I struggled to consciousness this morning, nearly twenty minutes after getting dressed and smearing makeup in the proper spots, I realized the calico had made a mattress of my body.

I wore black. Had the creature on my lap been black, I wouldn’t have coaxed it gently off of me. But calico is yet another story. Carefully, I pushed and prodded, hoping not to startle it as one would hope to avoid startling a skunk. With a yawn, and dirty look such as only a cat can muster, she stretched and jumped to the floor.

There, in the brief airborne split-second, she released a cloud of orange and white hairs which beelined for my black and immediately wove themselves into the fiber of my clothing. Did I see a single black cat hair? No.

See what I mean?

And we call them dumb animals!

Beware of small creatures throwing anything. Our local zoo houses a gorilla that amuses itself by throwing …ugh…never mind.
Posted by Scrambled Dregs at 1:57 PM 4 comments: