Minus a layer or two. Wink. Wink. 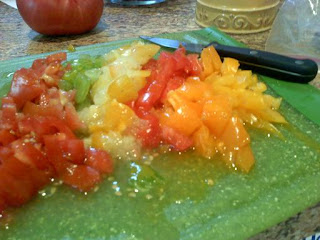 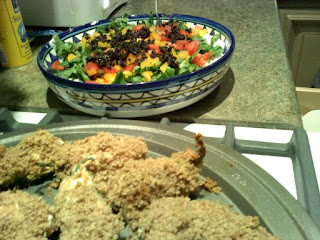 I'm not going to give you amounts. You'll have to layer it on to taste. If you don't like onions, olives, etc. leave em off, or go crazy adding even more of one item. Put the black beans in the bottom of a flat bowl/casserole/dish. An 8 x 8 or so. Spread it out. Dollop several blobs of Sour Supreme on the beans and "frost" the beans. The next layer will be the Salsa Verde, do the same thing with dollops and spread over cream. Then top with the chopped lettuce. Next the chopped tomatoes. Ditto onions and black olives. Last will be the colorful peppers. There is enough flavor that you won't miss the cheese. You can warm the beans before adding the other ingredients. But it's really good cold. Serve it with tortilla chips.

The Poppers recipe is HERE.
Notes on the changes we made:
Bread crumbs were Panko bread crumbs. Highly recommended.
The cheese was Daiya Pepper Jack.
We used Almond Milk
Our eggs were flax eggs. 1 TBSP ground flax seed plus 3 TBSP water for each egg, the recipe calls for 2.
So here is the ingredient list we used. Go to the link for the instructions. Gotta give credit for the recipe.
12 fresh jalapeno peppers
6 oz.   softened Tofutii Better Than Cream Cheese
1 ½ c.  shredded Daiya Pepper Jack cheese (or cheddar)
2-TBSP ground flax seed. PLUS 6 TBSP water (mix & set aside)
2 Tb   unsweetened almond milk
1 c.     panko breadcrumbs
½ c.    flour
Posted by Scrambled Dregs at 2:17 AM No comments: