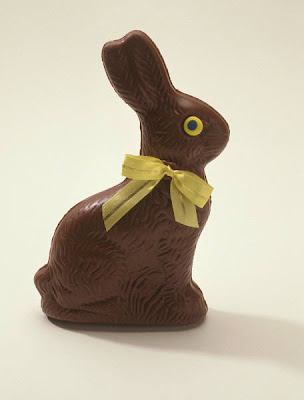 Christianity seems as fragile as a hollow Easter Bunny sometimes.
Why would an intelligent human being base their life on a religion started 2,000 years ago? A religion focused on the life and death of a man...a man who claimed to be God. And resurrection? Really?
Who can actually believe the stories in the Bible? A God who promises a horrifying eternity for those who won't accept His Son? A God who allowed Satan to ruin Job's life, just because Job was faithful and God had confidence that Job would remain that way.
What are those of us who believe in the Bible and in Jesus thinking? Are we thinking at all? Maybe we're the post-Easter clearance bunnies that finally sell at 90% off because we are missing two eyes, an ear and have a hole where our body should be.
Maybe.
Or maybe we know something non-believers don't.
I can only speak for myself. My experiences with Jesus are as personal and unique as my relationship with my husband.
Several years ago I was a nominal Christian, if that's possible, like being a little pregnant, I suppose. I believed, but only because I hoped...if that makes sense. I hoped it was true like a child hopes the Easter Bunny and friends are the real deal. An immature, lingering hunger for the slim chance of the reality of magic and miracles. Mostly because the reality that I saw and experienced every day wasn't at all magical or miraculous.
I wanted to believe that the chocolate bunnies were solid. And that money grew on trees and good people came out on top and bad people got theirs.
Finally, after life had left me (and by life I mean my choices and consequences as much as random acts of yuck) crushed I finally held my hands up in surrender. I had to make a choice, either blaming others and embracing cynicism, or giving God one last chance to give me reason to hope. I came to Him, just a pile of jagged chocolate slivers with two crooked googly eyes, and begged Him to help me.

The bizarre way He helped reminds me of His response to a broken Job. He asked me a question. No cynical ones, He didn't manifest in a cloud of smoke. A question that would never have come out of my thoughts swirled around in my head, and I knew. I knew that He would help me find the answer. Simple as that.
Then He began to rebuild me, using the truth in His words, His ancient and current promises, His love and His sacrifices for me. As each piece of chocolate melded to the next in His hands, with His tenderness, I began to feel whole. I didn't want to be hollow and fragile anymore. I wanted to have the inner strength that only comes from Him. Do I believe in God, His Bible and His Son? With every sliver, with every breath, I do. He has proven Himself to me. He doesn't work for me. I don't rub His head for good luck or kiss His feet for blessings. I know His plans toward me are good. Even if my circumstances aren't.

I used to struggle with trusting Him. I know how often I let people down. I also bear the scars of being let down. I have too much experience with the inner dark blot in each of us. I know what I'm capable of doing and what I've done, therefore, I know that every other person on this planet has that same capability to destroy. I didn't realize I believed that to be true about God as well. Until I read James 1:17. Every good and perfect gift is from above, coming down from the Father of the heavenly lights, who does not change like shifting shadows.
He's pure. He's honest. He doesn't play mind games. I don't always like what He says, but He's right.
So maybe my evidence and belief seems like shattered chocolate dregs to you. So ask Him to show you your tailor made evidence. As for me, His promises and blessings make me want to do the Bunny Hop...care to join me?
Posted by Scrambled Dregs at 12:00 PM 1 comment: