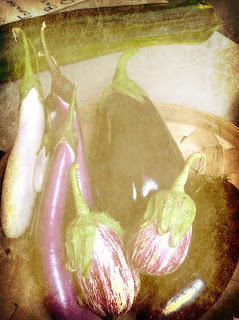 Nothing crazy happened at the farm. No creepie-crawlie, shuddery encounters. 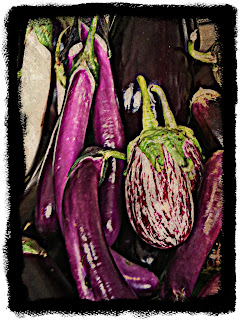 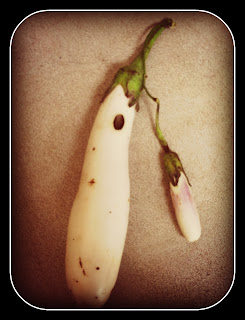 The vegetables were picked and ready to pack. The day was beautiful, almost autumn-like. And after weeks of heat, heat, heat, so welcome. The hundred degree dry wave has taken a toll on the veggies. The tomatoes are beginning to rebound from the heat and will probably continue as there are lots of sets and plenty of time for ripening. With the cooler temperatures there should be some decent picks left. The lettuces will be appearing again, soon. The potatoes are a different story. After some research, the farmer has decided that the uppermost potatoes were nearly cooked in the ground so they were quick to rot. They pulled out a decent yield. Just decent, though, and barely equivalent to what they planted. Then, over the following days potatoes began to turn. The yield shrunk to nominal. But. There hasn't been hail like last year.

The pack was quick and full of delicious items like eggplant, zucchini, cucumbers, onions, garlic, tomatoes, kale and basil.

Picmonkey helped me turn the pictures of the fabulous piles of eggplant into art. Something about the well-used plastic table and the harsh daylight shining on the eggplant, though beautiful, was a little bit stark.

Posted by Scrambled Dregs at 6:19 AM No comments: