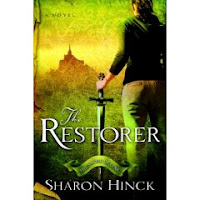 Happy Monday. Hope all the fathers out there had a happy Father's Day. I'm posting a book review today, with an mini-terview with the author. Fantasy and Sci-Fi readers (or those of you who like good and entertaining stories) click on the book cover for more info.


My Review
A peculiar and refreshing blend of the feel of Dekker’s Black, Red and White, Stephen Lawhead’s The Song of Albion series and chick-lit – the Restorer is a fantasy read that twists and turns, convicts and concerns, delights and despairs.

I’m not a sci-fi or fantasy fan because I struggle with the bizarre details of alternate realities. I have enough trouble with my own reality, thank you very much. But Hinck has woven a fascinating story.

As Susan’s life in an alternate universe progressed, the story grew stronger and more poignant. I was transfixed by the writing and the drama of the moments as Susan, beset by a series of crises, rose to her calling. The Restorer, the story, grew into its own just like Susan the pouty housewife grew into her role. The ending, a bit rushed, especially after the rich story telling that preceded it, was the major struggle I had with the novel and the main reason I’m giving The Restorer a 4 instead of a 4 ½.

I asked Sharon Hinck to share some dregs and this is what she gave me.

Father Tim in the Jan Karon “Mitford” books, because he is gently sharing God’s grace to everyone around him and doesn’t even know it. He is always available for God’s interruptions, and loves and appreciates even the quirkiest of folks around him.

Aragorn from Tolkien’s “Lord of the Rings” because people think he’s just a Ranger, but he’s so much more.

Anne (of Green Gables) by L.M. Montgomery – especially in “Anne’s House of Dreams” and other later stories when Anne is a wife and mom. Because she saw beauty, wrote, and loved well.

What crayon in the box describes you on a good day? Bad day? Which one do you aspire to be?
Sky blue on a good day – looking into things eternal, translucent, imbued with sunlight.

Deep gray on the bad days – matte, heavy, lifeless, and heading toward midnight.

I aspire to be the copper crayon – shiny, with earthy tone, impurities burned away, and able to reflect and sparkle

Purple Cow. Because it reminds me of how my mom always recited poems and ditties to me while pushing me on the swings when I was three or four. “I never met a purple cow. I never hope to see one. But I can tell you anyhow, I’d rather see than be one.”

Weeding the garden. Something to spiritual and visceral about tugging away the thistles and quackgrass so the vegetables aren’t choked. (Although I hate bugs and creepy-crawlies, so I’m always getting startled by beetles infesting the strawberries, or dive-bombed by wasps, or turning over a leaf and finding a green worm that needs to be squished, or even having a toad jump out of bush beans and scare me – that part I don’t like).

Thanks, Sharon. Nice of you to drop by.
Posted by Scrambled Dregs at 1:42 PM No comments: